Like many halflings, Enora has always been driven by an unlikely pairing of curiosity and luck. Her parents, both professors at Manaket’s premier arcane institution, the Occularium, fostered in their only daughter a hunger for knowledge that was rivaled only by her optimism and determination. Perhaps the result of her parents’ own mastery of magic, Enora had always possessed a natural understanding of the mystical inner workings of magic, and combining this with her fastidious research skills and intuition, she quickly rose to the top of her class.
When she came of age, Enora came out atop a pool of nearly a hundred applicants for a coveted governmental position researching some of the Occularium’s most valued magical treasures from the ancient Jistka Imperium. In this role, Enora found the perfect fit for her curiosity, drive, and magical acumen. But years of study of even the most esoteric and enigmatic of Jistkan relics wasn’t enough for Enora, and countless hours in the Occularium’s library aroused in her an uncontrollable sense of wanderlust.
To combat her growing frustration with the limits she felt her job placed upon her ability to uncover lore, and longing to study artifacts beyond just those of the Jistkans, Enora took a leave of absence, intending to perform research abroad on other ancient magical empires. Her request was granted, and she was given a year to learn what she could before returning to continue her work in the Occularium.
Enora’s destination was the ruins of Lirgen—one of the two nations completely subsumed by the Eye of Abendego just over a century earlier—where she hoped to find recently lost information about their mastery of astrology. The journey south along the coast of Rahadoum was uneventful, but the harsh and unforgiving swamps of the Sodden Lands and the less than welcoming inhabitants of the marshes therein provided Enora ample opportunities to use her magical skills merely to survive. The excitement of adventure grabbed the halfling during this journey, and she thought even in the earliest weeks of her sabbatical of how very different the arcane libraries of the Occularium would feel upon her return.
Yet it was a discovery she made in a half-drowned temple dedicated to the magic god Nethys—the worship of whom was forbidden in her homeland—that truly set Enora’s life on a new path. Within the dank and moldering sanctuary, Enora uncovered a stone tablet that radiated a magical aura unlike anything she had ever encountered before, even amid the most powerful of Jistkan artifacts under her charge in the Occularium. Setting her hand upon the arcane writing and reaching forth with her innate arcane abilities, Enora touched the very fabric of the magical energy that pulsed through the artifact, unraveling it ever so slightly to better understand it.
Immediately, her mind was flooded with magical revelations, knowledge beyond her wildest dreams, and a sense of a much vaster world of magical discovery to be explored than she had ever imagined. When she pulled her hand away, as much in shock as in fear of overwhelming her mind, Enora had a new understanding of the potential for learning that existed beyond the strictly secular libraries and laboratories of Rahadoum. A combination of rage and sadness overwhelmed her as she realized that her own rejection of Nethys and other gods of magic had been holding her back from attaining the knowledge she’d always yearned for. How could she return to Manaket and her governmental position knowing that so much more information remained beyond her grasp, simply because it was held in libraries dedicated to deities her nation had shunned?
Enora traveled east into the Mwangi Expanse and found passage down one of the region’s many rivers to the Arcadian Ocean, the entire time assessing her options. Her year of research was quickly drawing to a close, and she had to decide where she would go next. In the end, she wrote to the magistrate who oversaw her work at the Occularium and extended her period of study abroad, then boarded a ship set for Sothis, where she knew one of the largest temples of Nethys to be located.
Enora chose the pursuit of knowledge over the security of the life she’d known, and now lives a life on the edge of two worlds. She works continually through carefully worded letters to maintain her good standing with the Occularium in order to preserve her access to its myriad magical and academic resources, but is afraid to return home, lest her newfound respect for the power of the gods brings punishment upon her head. Now, Enora travels the Inner Sea in search of a better understanding of the inner workings of magic and the secrets of lost empires whose magic surpassed that of even the most powerful modern archmages, utilizing whatever resources she can gain access to, be they religious or secular in nature.
Enora is singularly driven in her search for knowledge, but isn’t above working with others in order to achieve common goals. She remains cheerful and optimistic about most things, yet holds deep-seated anxiety about the conflict she will inevitably face should she return to Manaket and be outed as a follower of Nethys. She doesn’t talk much about where she came from, but knows that one day her travels will take her back to Rahadoum, and she’ll be hard pressed to keep her secret. 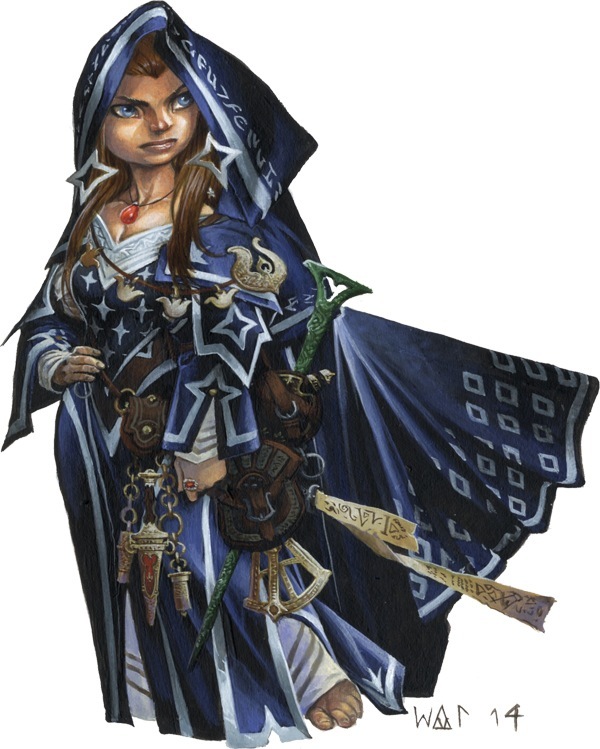