An exceptional student of a destoryed Dojo, Ember is trying to finish her training on her own by wandering

An orphan daughter of Immigrants, Ember became a child performer in order to make money. She was eventually taken up by a local Dojo where she became an exceptional student. However whiel they had trained her in combat skills, however before they could teach her the greater teachings of the order, the entire Dojo was destroyed by an attack by a rival order of Death Worshiping Monks (Nurruel). Ember wasn’t killed as she wasn’t at the Dojo, however she was left without any teacher. She is currently traveling trying to come to understand her teachings through experience, and seeing how applicable her standards are to the world around her.

Ember can be found in the high Temple of the Death God, where she has been cut off from her friends is trying to find a way to rejoin them, while taking out as many cultist as she can without being detected. She will join any party that fights against the death god, however she will betray them if they commit any evil acts, though she will wait until the best possible moment.

Approval- You can gain Ember’s approval by speaking her to her about the history of her order (which is dedicated to the Concept of Phlegmatic Melancholic LG tenets), anyone who understands the path of benevolence, any martial artist who has a philosophy behind them, anyone willing to explain magic to her, or people who have taken vows of poverty. She does not approve of accepting more money than is needed, or relying too much upon equipment when fists would do. She also detests false humility, and is very easily set off by anybody prolitizing their beliefs (She is very quite about hers)

Friendship- She has a fascination with magic, and loves food, a bit too much. She can’t stand kids, and will avoid them at all costs. She loves other cultures, though she doesn’t express emotions very much, so it is hard for her. She loves any sort of completion (as a spectator)

Rival- Don’t dismiss people without any given them time to express their views.

Romance- Ember is a romance option to any Straight Man who is of Good Alignment and isn’t a monk. She can be romanced by talking about her childhood, her order’s teachings, her sexual experiences with some local boys, her training, the affect of her Dojo’s slaughter on her, and try to find her a new master. She will not romance her master under any circumstances. While she will sleep with people, she will only seriously pursue a relationship that is focused on monogamy. The Partner must have a Reputation below 15 and Honor above 10. She really doesn’t want to have kids, and will not seriously pursue a relationship that involves the production of kids.

Death: Ember dies fighting against a force of attacking Monks, and while she is overwhelmed, she prevents them from opening the Draw Bridge of the Castle Gate 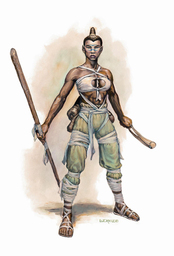