A creepy as fuck bard

Eldoth Kron speaks as though his every word should impress and dazzle. He really seems to enjoy talking about himself. He is apparently from the island kingdom of Ruathym, though he left as a teenager for the city of Waterdeep. His natural affinity for song and poetry was honed to perfection while he trained at the muscial college of New Olamn, supporting himself with gold borrowed from any one of his given lovers. It would seem that his skill in music is mirrored with his talent in the manipulation of others’ emotions. He skims over explaining how he came to leave Waterdeep, but it was apparently the result of an attempted tryst with Aleena Palidinstar. Piergeiron, lord of the city, discovered that his daughter was being used by a manipulative dilettante and likely became quite furious. Eldoth probably had to flee the city deciding it was time to use his bardic skills elsewhere.

Personal Quest: He is caught up by some bounty hunters from his past who are pissed. 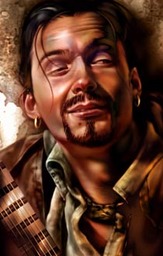