“The brilliant medtech known simply as “Doc” is driven to bring quality health care to underserved star systems. This has led Doc to keep some unusual company: pathosis-riddled crime lord Fashaka Four-Toes, the Red Band Rebels of Cadinth and even the Imperial military during a brief stint impersonating a member of the Imperial Medical Corps on the conquered planet Sullust. Doc has a talent for using bad people to save good lives–a fact he emphasizes to anyone within earshot. Some characterize Doc as a blowhard and scoundrel, but these individuals have never required his impressive surgical skills. Doc has visited every major galactic battleground over the past five years and saved more lives than even he can count.”

A brilliant physician, fearless journeyman and legend in his own mind, Doc is always on the lookout for the next great adventure to embark on. Born on the Core World of Ralltiir, Doc always envisioned himself a hero; rushing into dangerous situations and overcoming insurmountable odds, often to rescue a ravishing damsel in distress. This was the life that he wanted to lead, and when the opportunity for him to study medicine at one of the most prestigious academies in the Republic arose, Doc hopped the first shuttle to Coruscant.

Graduating near the top of his class, “Doctor Kimble” could have gone to any clinic or hospital that he wanted. But rather than slowing down, Doc began to offer his services in many of the most dangerous regions of the galaxy, often times getting himself in way over his head. Yet every time Doc has managed to come out on top and in the process has become quite a good shot with a blaster.

Beneath his constant search for an adventure is a drive to heal the sick and help those in need. The only difference between himself and his colleagues, in Doc’s eyes, is that he’s willing to rub shoulders with crime lords, swoop gangs and blockade runners in the process of helping those who need him most. 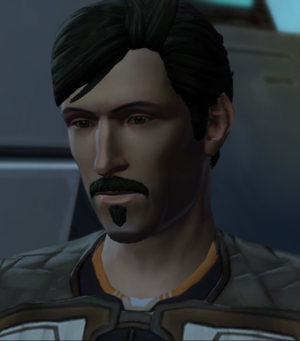