The Devil of Caroc is a bronze golem inhabited by the soul of a convicted murderer. She’s ruthless and relentless, yet something about the player piques her interest when they first meet.

The Devil was once a trapper in Cold Morn, a village that became notorious for its role in the Saint’s War. When she and her neighbors let the Readceran troops pass through town unopposed, they became a symbol of treachery and cowardice throughout Dyrwood. The Purges that swept the country began in Cold Morn, and everyone the Devil, along with everyone she knew, perished when an angry mob burned the village to the ground. The Devil’s soul, however, proved far too strong and angry to pass on, and so she became a lost soul for a while. She was later able to transfer her soul to a metal body, giving her a chance to seek revenge on the men and women who set her home ablaze.

She’s still a rustic at heart, but her crude manners belie cunning and a cynical sense of humor.2 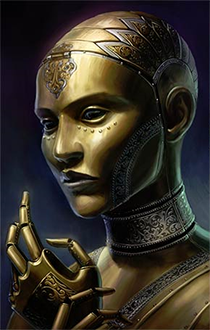