A young women who is able to see spirits, coming to explore and understand the world

This +3 Dao sword can harm incorporeal creatures creatures
This blade is claimed by two legends, one from the Prosperous East and one from the Golden Delta. In the first, a flower girl was wronged by an official, and an outlaw incited revenge for his own purposes. Trapping the official, the woman beat him savagely with a bouquet of roses, the thorns raking eyes and skin. An observing fox spirit frowned on hatred abusing such beauty and transformed the flowers into a sword. The official was killed, leaving the woman to ponder the hardening of her heart. In the second tale, an outlaw instead urged restraint and suggested asking the river for guidance. A golden carp answered the woman’s plea and, as it swam by, the sun on its scales took the shape of a blade that fell in the shallows at her feet. She took up arms in the spirit of justice and order was restored. Stories—and people—change with the influence that others bring.

“This gem is a tool of inner reflection for the wielder and, unwittingly, those around him. This gem exposes the inner strength and virtue of the user to all, awing them with his true nature. Only the most peace with themselves can use this gem, for others will see their own flaws reflected back at them.”

The earliest memories Dawn Star has been passed around as a child, never staying in the same place with the same people for very long, and always ostracized from society for having an aptitude to commune with spirits. She was named after an ominous light (the burning of Dirge), only visible from the Royal Palace in the heart of the empire. Later it becomes apparent that she is none other than the daughter of Sun Li the Glorious Strategist, the brother of the Emperor Sun Hai.
When Sun Li betrayed the Emperor along with his brother Sun Kin, his family was ordered to be executed, an order given to the Lotus Assassin Sagacious Zu. When he rebelled, he decided to charge himself with the care of the baby until a more suitable replacement could be found. After she was given to Hui the Brave in Tien’s Landing, she was delivered to the new master of the Two Rivers School, Master Li – unbeknownst to everyone at the time, her real father. From this point she studied in Two Rivers until the age of twenty, never knowing how close her family was. Zu, in the swamp, says he will help the player only after Dawn Star’s name is mentioned.

NOTE: If the player pursues the correct sequence of dialogue options, Master Sun Li eventually recognises his daughter, but then quickly discards her as another tool.

Romance: She will date a boy or girl of either sex who has Spirit of at least 15 and follows either the Path of the Open Palm or Closed fist. She is totally up for threeways

Personal Quest: She wants to realize the spirits of a haunted town.

Death: Dies fighting against a band of Red Ministers 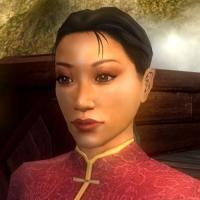