A failed pickpocket who failed one too many time, and has been recruited as a Grey Warden. He has taken it well

Daveth grew up in a small unmapped village a few days east of Ostagar, and near the Korcari Wilds. He fled from his village and his father as soon as he was able and later moved to Denerim, where he spent six years living as a career criminal.
While in Denerim, Daveth tried to cut Duncan’s purse, only to be caught red-handed by the Grey Warden. He fled, but the guards caught him before Duncan could. With the guards seeking to hang him for repeated offenses, Duncan intervened with the Right of Conscription, simultaneously saving Daveth’s life and recruiting him to the Grey Wardens.

Quest: Daveth’s quest is to find his village and free it from the gang who are running the place. 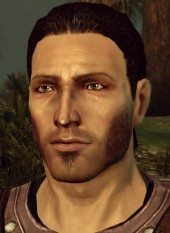