The Sage of Fire

arunia is the patriarch of the Gorons in Ocarina of Time. He is a strict leader who sees the greater cause behind initial problems and solutions. Ganondorf visited the Gorons shortly before Link did and demanded they give him the Spiritual Stone of Fire, also known as the Goron’s Ruby. If the Gorons would not hand over the rock, he’d keep the entrance to Dodongo’s Cavern, their main source of food, closed.6 Despite that this would mean that the Gorons would starve to death, Darunia did not give the stone to Ganondorf, knowing that it was too important. However, the Goron’s Ruby also became more and more delicious-looking to the hungry Gorons. To protect the gem entrusted to the Goron race, Darunia locked himself up in his room with the ruby, stating that he would wait there for the messenger of the Royal Family of Hyrule.7 When Link arrived, he was informed of this by the other Gorons. He then went to Darunia’s room and played Zelda’s Lullaby. Darunia recognized this sign and opened the door, only to be enraged by the fact that the Royal Family’s messenger was a mere boy and refused to talk with him about the Goron’s Ruby.3 Link was tipped by another Goron that the way to Darunia’s good side was through music and dance.4 From the words of several Gorons, Link understood that the song most likely to get Darunia in a good mood was none other than Saria’s Song.89 Link played the song for Darunia, causing the latter to lose his depression and start dancing like mad.10 Darunia still wasn’t going to give up the Goron’s Ruby just like that and challenged Link to prove his worth by destroying the monsters inside of Dodongo’s Cavern. As a small bit of help, he gave Link the Goron Bracelet.
Link passed the test and defeated King Dodongo. When he left the cavern, Darunia was waiting for him. He thanked and congratulated Link for what he had done. He then asked Link to become his Sworn Brother, symbolized by giving him the Spiritual Stone of Fire.6
Some time in Link’s seven year absence, Darunia had a son, who he named after his friend and the Gorons’ hero: Link. Darunia made sure to tell his son as much as possible about the “legendary Dodongo Buster” who had helped them so much. Shortly before Link returned, Ganondorf returned to Goron City, freed Volvagia, and imprisoned the Gorons in the Fire Temple with the intention of having them eaten by Volvagia, as an example to the other races.11 Both Darunia and his son managed to escape this fate, but Darunia left for the Fire Temple anyway in an attempt to save his people. Before he left, he instructed his son, who stayed in Goron City, to let no one follow him.12 However, when the latter met with the hero he had heard so much about from his father, he was convinced that he should let him help and told Link about the secret entrance to Death Mountain.13
Link met up with Darunia in the Fire Temple. Darunia was very happy to see his friend again but also realized this was not the time for talk. He asked Link for his help again. While he would take care of Volvagia, Link had to free his people.14 After fulfilling Darunia’s request, Link encountered and defeated Volvagia. He was then teleported to the Chamber of Sages to meet the new Sage of Fire, who turned out to be none other than Darunia.2 Darunia thanked Link for helping him save his people and gave him the Fire Medallion,15 reminding him that they were true brothers.16
When Link defeated Ganon, Darunia and the other Sages bundled their powers to seal away Ganon. During the ending, he could be seen overlooking a celebrating Hyrule on Death Mountain with the other Sages. 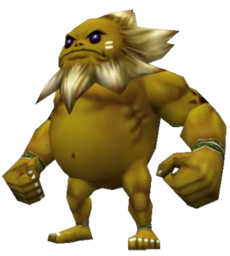