When Crowe was a young man waiting to depart on his first horse gathering, he had the same dream every night for five weeks. It always started and ended the same way. Each time the storm came. Each time the stampede thundered out of the canyon to the south. Each time his body was trampled to pulp before he woke up soaking with sweat.
Every night.
Crowe was born under an auspicious sign during a thunderstorm that scoured the Storval Plateau one burning autumn evening. After generations of uncertain prophecy by the tribe’s shamans, the holy ones were reluctant to predict much about the newborn aside from foretelling that he would one day become a significant force.
From a young age, Crowe was trained to be a perfect groom, and it was clear that in time he would become a good trainer. He learned from his mother and father, as well as from his aunts and uncles, for even among the animal-loving Shriikirri-Quah, his family had a way with horses. They even supplied many a burn rider of the Sklar-Quah with their signature steeds, and foreigners came from miles around seeking to trade for the family’s fearless stallions.
Crowe’s father was known throughout the Storval Plateau for his skill at capturing and breaking wild horses, and his mother could read the face of nature as if it were her own child’s. Together, Crowe’s parents trained their horses, content with their lives. But their son was becoming unruly.
As a youth, Crowe often got into fights then claimed that he didn’t remember how the scraps had started. He would feel his heart beating against his ribs. He would hear the blood thrumming in his ears, and that would be the last thing he recalled. People in the tribe grew cautious around the boy. After far too many of these sorts of scuffles, his mother began asking him why he was so angry. Crowe claimed again that he didn’t remember, that the last thing he had heard before each fight broke out was the storm.
As Crowe grew stronger of frame, he learned the traditional ways of Shoanti warfare. He trained with the weapons of his ancestors and learned how to protect his people and their way of life. Crowe learned the klar, mastered the earth breaker, and also studied the natural world and the ways of magic that his mother followed. Throughout his tutelage, he challenged his elders and was challenged by his not-so-infrequent gaps in memory. Some in the tribe thought this was simply an excuse for his misbehavior, and many blamed his parents for his violent outbursts.
Though Crowe was still considered to be too young for a long outing, his father decided that taking his son on his first horse gathering would teach the boy discipline. The herds would be funneling through the canyon in a matter of weeks, and Crowe’s father hoped to gather a few more horses, the most prized of which were the foals of Bright Star—a stallion that had eluded him for the past five years. Rounding up even one or two of the foals would be a major boon to his family’s stock.
Crowe, his father, and seven other men and women from the tribe traveled for three days. Horses are predictable beasts, and the Shoanti knew where the herd moved in the uplands. The herd would race through the canyon until it leveled out to a dry riverbed that cut through the blistered land. When the herd came through, the hunters would be ready with ropes and snares.
In order to test Crowe’s patience, his father sent the youth ahead to the canyon’s mouth. He wanted his boy to wait, to listen to hooves and snorts echoing down the canyon. He wanted him to throw the loop around a horse that he could call his own. He wanted Crowe to concentrate on his task and listen past the distraction of the storm.
Crowe crouched upon a flat umber rock, trembling with terror. All he could hear was the storm in the distance, a low, rolling rumble that thundered in his eardrums. He was sure what he heard was his fear, his rage. This was the canyon. This was the night he would die. Why couldn’t he just leave? Just walk away from it all?
Tradition.
The thunder beating in his ears changed. It wasn’t just internal; it was echoing through the canyon. The herd was coming. Crowe looked to the sky as dark clouds rolling in from the south obscured the setting sun. The others shouted orders and set up positions with their snares. Crowe scrambled back to his designated post as hundreds of horses filled the canyon, their hoofbeats driving a pounding echo off the canyon walls.
Then the storm broke. Thunder rumbled and crashed through the canyon and lightning bathed its rusty walls in flashes of white.
After the storm had passed, Crowe awoke to find his cousin sitting on his chest and slapping his face, claiming that he was to blame for the carnage spread all around him. More than a dozen horses lay dead, and half of the hunting party lay trampled in the riverbed. They said Crowe was to blame. They said there was no storm. They said he had done it.
Slick with blood, confused, and full of no uncertain amount of shame, he stumbled through the night. The dawn broke on Crowe’s new life—a life not burdened by tradition, a life that was numb to fear. 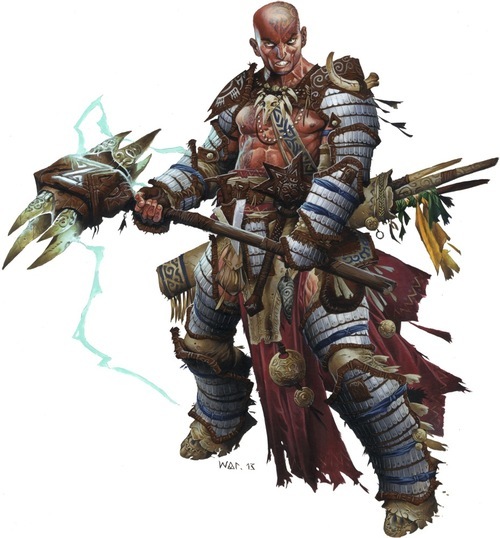