A swordsmaster hoping to master her skills

Crimson Khana is found in the Imperial Arena, as champion of the Bronze Division. She has been speculated to have the ability to climb through the ranks with her talent. In the quest “A Bronzed Opportunity”, the player is given a choice: to poison her before the battle (with the aid of Sweet Poison Lyn) or to fight and defeat her fairly in the ring. The former will earn the player Closed Fist points, while the latter will earn Open Palm points.
Fighting TechniqueEdit
Khana fights with two sabers, and uses the weapon style Crimson Tears. If the player informs her of the plan to poison her, after her defeat she will offer to teach the player her technique. If the player does not inform her of the poisoning attempt, but fights her fairly, Khana will teach the player Eyes of the Dragon, which is virtually identical to Crimson Tears, but physically weaker. 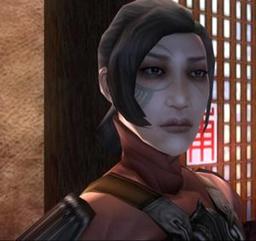