An accomplished idnosaur rider from the Talenta Plains, Corrash has brought his “uncivilized” ways to the very center of Khorvaire society. After his father dishondered himself by fleeing from a battle against Karrnathi troops when his people were serving as auxiliaries during the Last War, Corrash left the plains to prove himself to the rest of his clan. He has taken up a life of adventuring with a group of other outcasts, a half-elf cleric, a human sorcerer, and a kalashtar psion, currently working within Sharn. Corrash and his band often wind up taking jobs or pursuing quests that are over their heads. Though they have had some basic success, most of this was through luck and last second cunning more than skill, and they have almost died far too many times then is comfortable, suffering many setbacks and injuries along the way. The hafling hopes to someday find a patron for his band, somebody to fund their exploits so they can spend more time adventuring and less time seeking the resources they need to keep them on a job. Corrash maintains a connection to his homeland through the clothes he wares and the weapons he wields, but his most beloved memory of the windswept plains is his companion beast, Razoreye. It is sometimes the object of vile looks in the City of Towers, and Corrash wouldn’t have it any other way. The more time Corrash spends away from the Talenta Plains, the less he wants to go back. He enjoys the comforts and opportunities available in Sharn,- especially the chance to fight in glorious combat only to then go home and relax.

Death: Dies fighting against a band of Ebberon Bugbears during the guerrilla war. 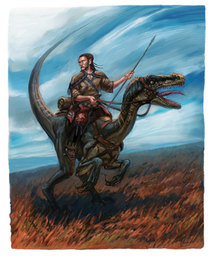