Coran reveals that he hails from the Forest of Tethir, and while he has great memories of his time there, the serene lifestyle he felt it offered was ultimately not for him. Instead he traveled to the city of Baldur’s Gate, dreaming of wealth, power, and respect. With nary a coin to his name, he resorted to thievery, stealing only from those that he felt could spare it, and swearing that he would quit once he had enough gold to start his own business. Unfortunately, he soon grew to love his new lifestyle, looking forward to each hair-raising escape, dangerous break-in, or beautiful woman. Occasionally he would need to leave town for a while, disappearing into the wilderness until things had cooled down and his name was less known. His most recent retreat is apparently the result of a relationship with the female sorceress Brielbara. He sheepishly admits to being caught in the act of seducing a female member of the Knights of the Unicorn, and being forced to flee from the violently jealous mage.

Recruitment: Help him kill some Wyverns

Personal Quest: He discovers he has an illegitimate daughter, help him out with that

Death: Ironically, dies at the hands of Wyverns, who he is able to mostly kill before dying from the poison. 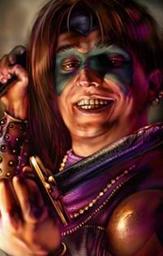