The adoptive Daughter of a Dwarf and the Wife of a drow, interesting life

Combat Style: Cattie-Brie has selected archery as her combat style. She gains the benefits of the Rapid Shot feat as long as she wears light or no armor.

Favored Enemy (Ex): Cattie-Brie gains a +2 bonus on his Bluff, Listen, Sense Motive, Spot, and Survival checks when using these skills against goblins. She gets the same bonus on weapon damage rolls against creatures of this kind.

Wild Empathy (Ex): Cattie-Brie can use body language, vocalizations, and demeanor to improve the attitude of an animal. This ability functions just like a Diplomacy check to improve the attitude of a person. Her bonus on the check is +8. The typical domestic animal has a starting attitude of indifferent, while wild animals are usually unfriendly. Cattie-Brie and the animal must study each other for 1 minute. This ability can also be used to influence a magical beast with an Intelligence score of 1 or 2, but he takes a -4 penalty on the check.
Items

Greater power: Overcomes all DR and can cut through any non magical material (DR provided by Magic weapons doesn’t count)

Special Purpose: Defeat/slay all (other than the item and wielder).

Dedicated Power: Cause rage in wielder as wizard spell.

Personality: Taken from Dantrag Baenre, a drow battle master, Khazid’hea has little personality of which to speak. The blade longs for little more than the chaos of battle and the blood of foes, and it constantly eggs its wielder into battle and is jealous of any kill for which it is not responsible. However, the blade makes little distinction between friend and foe and is likely to demand its wielder battle allies when all enemies have fallen. The blade grants its wielder the benefits of rage only if the wielder agrees to kill all “foes” or the blade is dominant. If Khazid’hea is dominated by its wielder, it alter its pommel to better suit the aesthetic tastes of its new master.

Circlet of Starlight Sight: This circlet grants the wearer low-light vision, which is the ability to see twice as far as a human in starlight, moonlight, torchlight, and similar conditions of poor illumination.

Taulmaril has a 3 enhancement and arrows launched from it emit a powerful jolt of magical force and deal an additional 1d10 points of force damage on a successful hit. If the arrow successfully hits a target protected by a force effect, such as a shield spell or bracers of armor, it might dispel the force effect in addition to damaging the target. Make a dispel check (1d2010) against the effect (DC 11 + caster level). If the check succeeds, the force effect is dispelled (if a spell) or suppressed for 1d4 rounds (if a magic item). Incorporeal creatures get no miss chance against force weapons. The Arrows can break through non magic materials and overcomes the first 10 points of DR. against small creatures, it has a 50% chance of going through the target and hitting the next

If used as an offensive weapon, Taulmaril acts as two-handed melee weapon that deals 1d6 points of bludgeoning damage. The wielder does not get any masterwork or enhancement bonuses when using the bow to attack in melee.

Quiver of Anariel: Quivers of Anariel appear to be typical arrow containers capable of holding a score of arrows. However, the quivers automatically replenish themselves with standard or magical arrows, such that they are always full. This particular quiver creates arrows made of alchemical silver.

Once an arrow it taken from the quiver, it must be used within 1 round or it vanishes.

Death: Dies fighting against a Black Dragon, which she manages to bring down with her 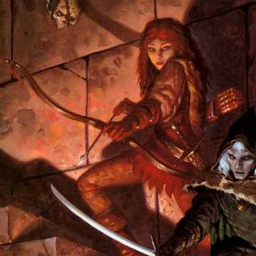