Weapon of Choice: Warhammer and Buckler

“Casavir radiates an aura of strength even though his face often carries an expression of resignation. Well into his thirties, Casavir takes his status as a paladin very seriously and maintains a dignified and sophisticated air to him. Devoid of any smiles or excitement, Casavir is polite, measured and calm in speech and body language.”

Romance: He is a romancable option for any Good Female PC he might hook up with them, but it will take a girl with Wisdom of at least 16 for him to consider settling down with. He is also interested in girls much younger than him (he is 35, likes 25)

Death: Dies fighting against a band of Shadow Reavers during the fall of the Outer Wall 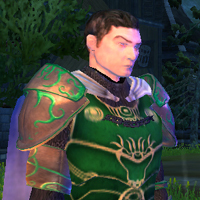