Weapon of Choice: mace and +1 Round Shield

Selune’s Promise A weapon once owned by a grief-stricken high priestess of the Moonmaiden, Selune’s Promise has a short and sad history. Fassa the Melancholy (as she is now known) was the head of a band of Selunite adventurers dedicated to destroying undead wherever they found them. The band was initially quite successful, rarely suffering any casualties. Tymora’s luck could not stay with them forever, though. In 1156, Fassa and her band entered the Sepulcher of the Dim. The band knew the Sepulcher was rumored to contain a “leak” to the Negative Material Plane, but they had no idea just how many undead creations were inside. Mixed in with the seemingly harmless poltergeists and phantoms were powerful spectres and wraiths. Over a short and chillingly quiet period of several minutes, almost all of Fassa’s allies had their vital energy drained away. Fassa and her remaining companions fled and tried to form a plan of attack. When they returned on the following night, all of Fassa’s former companions had been turned into slave spectres under the control of the master. She and her few remaining comrades destroyed the master spectre and eventually destroyed the souls of her tormented bretheren. In the end, Fassa was the only one left alive. Fassa returned to her temple in misery and prayed to Selune that she never forget the agony of that night. Selune granted her request by causing a ghostly white and blue mace to appear on her bed when the next full moon rose. Carved into the shaft of the weapon were two words: Never Forget. Fassa became almost fanatical in her undead hunting in later years. At the age of thirty-three, tired and bitter, Fassa fell into decline. On the night of a full moon, she renounced her faith to Selune in front of her superiors and fellow clergy. Hours later, she threw herself into the Moonsea from a high cliff. The mace was found in her room and reluctantly kept in the church. Many years later, the new high priest of the temple decided that the weapon had an unpleasant legacy and should be thrown into the Moonsea. The history of the mace ends with this event.

Ilian’s Hunting Helm
This helm was worn by the great elven hunter Illian Willowdusk. It was constructed by a group of well-intentioned halflings when Illian hunted down and killed a priest of Malar and his bloodthirsty trained animals who had been plaguing the halfling shire. The helm served Illian well until he went hunting a great stag on Cinnaelos’Cor, an elven holiday. When the stag leapt into a thick patch of vines and briars, Illian followed. As Illian leapt through the tangle, the huge horns of the helm became caught, jerking his head violently. He was found dead the next day with a broken neck.
STATISTICS:
Armor Class Bonus: +2

Boots of Moander
These patchwork boots of red and black leather were created by cultists of Moander, an ancient god of rot and decay. The boots were used by a number of the Darkbringer’s faithful when they fought against Moander’s numerous foes, many of whom worshipped nature deities. The boots were last claimed by Aldarra of Chauntea, who in turn gave them to a half-elven ranger friend, Liberon Twelvetrees.
STATISTICS:
Wearer is immune to Entangle.

Glimglam’s Cloak
This heavy cloak was once owned by the gnomish warrior Glimglam. A rare hero among his people, Glimglam scoured gnomish lands for giants and goblins, felling them all wherever he found them. This particular cloak was made for him by his wife, Enetta, and blessed by the church of Garl Glittergold. When Glimglam was killed by a Fire Giant king, Enetta stitched a crude red heart onto the breast of the cloak. He was buried with it. Twenty years after Glimglam died, human thieves robbed his grave and stole the cloak. Those thieves later sold the cloak to ogres in exchange for wine and traveling rights through a particularly dangerous portion of the High Moor.
STATISTICS:
Armor Class Bonus: +1
Special: all saves +1

The halfling warrior-rogue Edley Bramble was the owner of this fine weapon. Edley was a villain to some, but a hero to many more. Despite the fact that most halflings publicly regard Edley as a scoundrel and bad influence on halfling culture, many secretly revere and admire him. Edley’s pranks and adventures among humans and elves are recorded in some of the folksongs created by Waren Blackbird.
STATISTICS:
Ranged Attack Bonus: +3
Damage Bonus: +2

This armor was made by the dwarven smith Karador and an elven enchanter known as Elameth of Five Trees. During the time of cooperation between the Hand of the Seldarine and Dorn’s Deep, many wondrous items were produced. This suit of armor was one of them. Exceptionally light and beautiful, the armor was originally worn by a female elven marshal in the Severed Hand, which is why the orcs didn’t take it when they sacked the towers. The armor was later stolen from the Hand by Maiden Ilmadia.

A thick steel band set with quartz, this tough-looking ring was created and worn by the Cormyean battle-mage Jasper Silverblood. Jasper was a stocky, gruff man who appeared more like a common laborer than a wizard, and he liked it that way. He used this particular weapon on rowdy, corky soldiers when he confident it wouldn’t kill them. He went down in history as one of the strictest disciplinarians ever to have command over the Purple Dragons.
stats
Can caste Shocking Grasp 4/day

RIng of Holiness: ‘Honorary Ring Sune’ Rings of this type were given to faithful priests of Sune who demonstrated actions of astounding integrity and kindness.

Stats
Grants an extra spell of each level 1st to 4th level.

One of the many beautiful enchanted sashes created in the southern reaches of Zakhara, this luxurious silk item was created to aid its wearer in evading attacks. The Brotherhood of the True Sun, a society of holy slayers, granted tehse sashes to their moust devout servants. This particular sash was most recently in the possession of the holy slayer Kamu Bedi. A string of delicate black characters on the red silk read, "Be swift, powerful and deadly. But above all else, be mortal.

Hands of Takkok
Gauntlets of ogre Power: "Hand Takkok’ are exactly that, his very hands. He lost them he attacked a strange man crossing the SPine of the World. The mysterious man turned out be a mage of incedible power, and he used Takkok’s hands to create this pair of ogre skins gauntlets.

Amulet are one the most favored items to enchant by mage, because of their ability to be worn without interfering with the delicate rituals of spell casting. This particular amulets has been infused with various magics that are designed to protect the wearer from harm.

Death: Dies fighting on the second level of Minas Arnor, fighting against a band of Geist 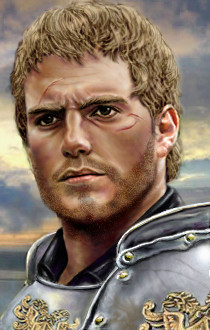