A vanshir with anger issues.

Weapon of CHoice: What ever you call those badass hand blades

Basheera was born to a prominent noble house in Shar Vahl and she languished in the opulance of her blush couches and under the tender ministrations of her servants. When not on her couch, she idled her days away with wild ventures into Shar Vahl, rebelling against her family at every turn. Unable to control their spoiled and headstrong daughte,r Basheera’s parents enlisted the help of Animalist Sahdi and order her to laern the disciplined way of the beastlords. She said goodbye to her luxurious lifestyle and took up residence within the training ground of the beastlords. Basheera had grown acustomed to ordering her servants, sleeping all hours of the day and eating only the choicest bits of food. Now, her world consisted of early mornings and rigorous physical activity. The young Vah Shir followed her orders begrudgingly and over time developed a strong respect for the beastlords. Respect turned to honor and honor turned to love. When she reached her first level of illumination, Animalist Sadhi led her through Hollowshade and into the Grimling Forests to the north. He ordered her not to return until she had found true enlightenment. For days she wandered, seeking an omen. After a week of searching, she sat upon the shore of a small stream. Tears welled in her eyes. “I have failed” she whispered. “Somebody please help.” She buried her face in her arms and wept. At that moment, she felt the wetness of a tongue licking at her hand. The green eyes of a small tiger burned, strong and steady into her own. She blinked back the tear and stared at the creature. They gazed at one another for an eternity until Basheera had no idea where her thought ended and tiger’s began. She returned to her master, tiger in tow. “I know enlightenment now, Master Sahdi” she told. "Juma found when I could release my pride and ask for him. We are ready to learn more. " Basheera now roams the lands of Luclin in search of new experience that may strengthen the bonds with her warder. Juma ever vigilant grows in strength and spirit as the wisdom of her master expands. The adventurous beastlord seeks to find other who lacks guidance as she once did and to help find or regain the path of their destinies.

Death: Dies fighting against a band of enemy beastlords. 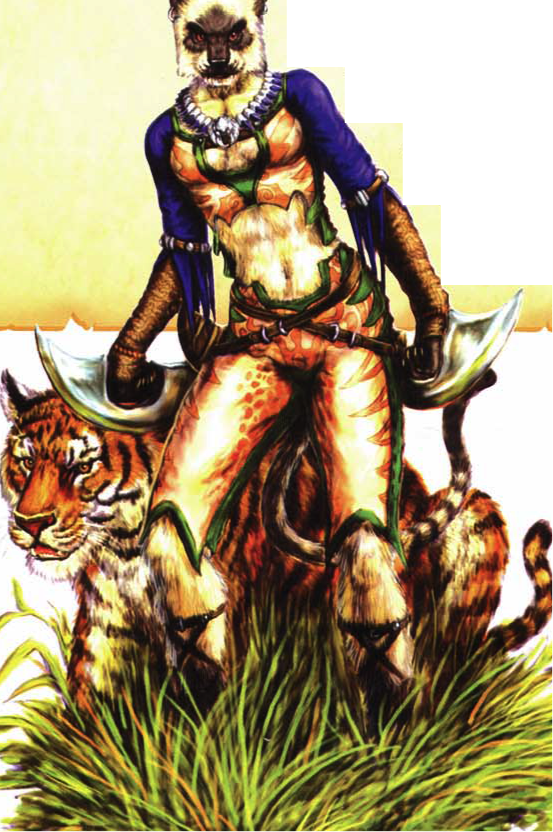