Charon’s Claw: +5 Dueling Saber. Intelligent Item, NE, Darkvision 120, Cha 16/Wis 16/Int 10, Ego 28 (The sword is entirely submissive to Enterai.
At Will: Darklight
Festering Wounds, any enemy hit must make a fortitude DC 25 or contract Deathsong. Should it be a critical hit, which makes the foe lose a D4 to Str, Dex, and Con. Should the Blade be stuck in a target, a target grabs the blade directly, or if the wielder fails a fight with the blade, their soul is trapped within the blade and their body is desperateness. The Sword also can at will produce trails of ash in the air, which may or may not grant an advantage to the wielder

Charon’s Gauntlet: Can absorb Magical or psionic energy up to 9 levels (essentially it can absorb 1 9th level spell, 2 8th level, 3 7th level ect, or up to 30 points of Power POints/Mana/Magicka/Spell POints/. The wielder of the Gauntlet can shoot those spells back at any point as long as the guantlet doesn’t over load. Should the Gauntlet overload on either form of magic, every spell in the gauntlet will be launched at the same time with random targets and in random directions. It also functions as an amulet of armor +1 and can use Anti Magic Field 1/day Also contains a single weapon that can be summoned at will, currently Entreri’s Saber It also has spell reflection DC 18 on at all times, which the wielder can turn off at will

The Ruby Pommel Dagger: +4 Vampiric Dagger. If it scores a critical hit then it can inflict a single Negative Level which restores 1D10 hit points to the wielder. These hit points go away after an hour. Once per day can deal an extra 2D4 damage

Entrei’s Hat: This hat makes him immune to creatures with infravision. It also will always stay on its head unless physically taken by another living being. Their is always a garrote located within it. 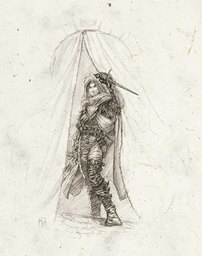