A ruthless Red Wizard trying to do what he thinks is right.

This man is deathly pale – even his eyes are drained of what once may have been a far more vibrant hue. Colorless, too, is his demeanor. His face is without age, yet wrinkles mark the stern outline of a brow too often furrowed, and a mouth rarely lured out of the frown to which it has long since become accustomed.
When he looks at you, however, you catch occasional glimpses beyond his stoic visage. There are flashes of anger, sadness, confusion, regret, and despair – all of them the mark of a loving kinship that persists despite all else that has transpired."

Araman, originally named Eveshi, was a priest of Myrkul like his brother Akachi. The two brothers were given to the clergy as a sacrifice, and they became priests in Myrkul’s service. He was shy, seldom spoke, often remaining in the shadow of his brother, though would sometimes laugh or giggle. Though he was named Eveshi by the clergy, he was also named “Ahrraman” by Akachi, which he would later adopt in condensed form as his name.
Akachi had become the high priest of Myrkul, but the death of the Founder, his Faithless lover, created a conflict. Myrkul refused to exempt her from being condemned to the Wall of the Faithless. In response, Akachi turned on his god and launched a crusade against the Wall, with Araman and many others at his side.

Though the Founder was freed, the crusade failed to stand before Myrkul’s host. Akachi was cursed as the spirit eater. And Araman was given a choice, join his brother as a spirit eater or correct these mistakes by killing the “Red Woman.” Araman chose the latter, and was made immortal and placed under a geas. Araman came to believe he finally made a choice for himself, and tried to correct Akachi’s acts by pursuing the “Red Woman” and returning her to the wall. His previous reputation as the shy younger brother allowed him to join the Academy of Shapers and Binders unnoticed.

Araman, the Red Wizard
Added by Melios
Araman incited a coup led against Nefris, the headmistress of the academy, one of the Founder’s aspects. He sent Khai Khmun to kill Lienna and Safiya, but he was slain by Safiya and the PC in Shadow Mulsantir. As the player and Safiya retraced Lienna footsteps, Araman continued to search for the Founder. Once they arrived back at the Academy, he had his supporters remain in the shadows while they let them open the sealed door in Nefris’ chambers. With the door opened, they confronted them. Araman cryptically spoke to the player as though he/she is Akachi, and left.
However, he had followed them through the portal to the Astral Plane to reach another portal that led to the Founder’s Sanctum. As he neared in on her, the player catches up with him. He insists his battle, as always, was with the “Red Woman” and this is what he must do. There is a strong hint of jealousy towards her, indicating deep resentment for taking Akachi’s attention in the past. Regardless of the direction of the conversation with him, he sees the player, like Akachi, as being a pawn of the Founder, and ultimately is slain in the ensuing battle.

Araman, the Priest of the Dead
Added by Melios
His soul however had been bound to the Fugue Plane, remaining there until he killed the Red Woman or died trying. He remained devoted to Myrkul, and continued to serve under the new god of the dead, Kelemvor.
If the player chooses undertake the crusade, he will eventually confront him/her at Eternity’s End intent on stopping the Third Crusade. He is angered by the player’s choice, seeing him/her as stubborn and deluded as Akachi, and wishes Myrkul had just left Akachi in the wall and never started this mess.

If the player betrays the crusade, he joins up the party temporarily to help him/her stop the crusade and retrieve the soul from the Wall. In this case, a vengeful Kaelyn would attack the player instead of Araman at Eternity’s End.
Death: Dies fighting against a Pseudo Lich who he destroys. 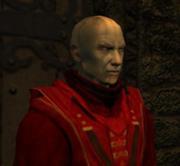