Vir Atish’an (bracers)
+13 hit points to all healing
There is never a shortage of hunters. The Vir Tanadhal, The Way of Three Trees, has lured many to Andruil’s side. The Vir Atish’an, The Way of Peace, is a harder path to tread, and few are called to hear Sylaise’s wisdom. Those who hear that call learn the arts of the healer and the mender. —As told by Gisharel, Keeper of the Ralaferin clan of the Dalish elves

Among the magi, some still whisper of Caleth the Renegade. Seeking freedom from beneath the templars’ heel, he fled the Chantry with a cabal of his most loyal acolytes. They reached the mountains before the winter squalls and lived there as free men for one glorious season. The spring thaws brought a vast mercenary army, however, paid for and led by the Templar Order. Wanting to avoid bloodshed, Caleth and his acolytes surrendered peaceably and allowed themselves to be made Tranquil.

Robes of the Pretender
+2 to Magic, +1 to all elemental attacks, +7 to mana regeneration

As the Chantry’s hold on the kingdom grew, and Aldenon’s rebel mages were claimed one by one, the great Calenhad came to regret letting the Circle form in his kingdom. Certainly he missed his old friend’s counsel.
And then Calenhad disappeared, leaving crown and kingdom to his unborn son.
One story says he tracked down Marterel the Elusive, the only one of Aldenon’s apprentices who was never captured. Calenhad managed what the templars could not and found the mage. He asked Marterel where Aldenon had fled to, but Marterel refused him. The next night, the king asked again, and was again refused, so he began to tell Marterel his whole life’s story. After a full week, the king reached the end of his tale and Marterel heard the regret in the king’s words. So the mage broke his solemn vow and told Calenhad where his old master had gone. Calenhad thanked him and left to find his truest friend.

Whether Calenhad ever found Aldenon, what they said, and whether they made amends—only the Maker knows. But that’s the last anyone ever saw our king.

When a templar takes his vows and enters the service of Andraste, he is presented with a suit of ceremonial armor to be worn when in the presence of the grand cleric. Every piece of the armor is covered in the iconography of blessed Andraste.
The cummerbund is wide, made of interlocking steel plates inlaid with gold, and adorned with two hundred and eight embossed stars along the edging: one for each day Andraste sung to the Maker to deliver her people. The center plate depicts, in bas relief, the burning Sword of Mercy. Beside it is a shield, representing the disciple Havard. On the other side is ring split in half, which symbolizes Maferath. The buckle is formed like a sun, representing the Maker. On the steel inner face of each plate, a line of the Chant of Light is written.
The last is an interesting touch. Concealed artistic flair or an overt cheat sheet at mass?

—An excerpt from The Chantry: An Introspective, by Sister Petrine, Chantry scholar

Memory Band (ring)
1% increased Xp gainMade by the Formari, these lyrium-infused rings are supposed to help apprentices retain their lessons. They work rather well—too well, perhaps, as less-capable students sometimes wear three or four per finger. This ring boosts experience points by 1%.

Band of Fire (ring)
25% fire Resistance, 10% spirit resistance, +3 to hit points
The magical fire used to forge these rings requires great care, but unfortunate incidents of singed eyebrows and burnt hair still result. There is some speculation that this is why the Formari often shave their heads

This weathered silver amulet has passed through many hands over the years. A deep blue sapphire almost glows in a certain light. Although time has faded its intricate engravings, the amulet has a certain majesty about it.

Produced in small numbers for the Imperial Chantry and the dedicated combat enchanter, as they tend to impose a skittish stance during casual wear.

Recruitment: Working as an underground healer in a templar run city, trying to lay low and not attract their attention.

Death: Dies fighting against a Powerful Pride Abomination, destroying it in the process of his own death. Very awesome. 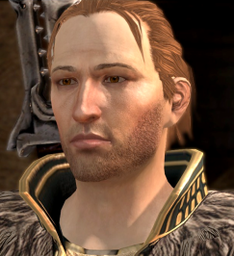