A bald elf seeking revenge after what happened to his family.

Angst: For having his family slaughtered by an evil ogre.
Arrogant Kung-Fu Guy: Is quite obnoxious, but at least he does apologize when required.
Bald of Awesome: So far the only elf to not have long hair.
Blade on a Stick: A spear.
Glass Cannon: His defense and health aren’t impressive, but his spear ability makes him extremely useful in battle.
My Species Doth Protest Too Much: Somewhat, though it’s not explicitly voices in the game, but a case of All There in the Manual. Elves in The Dark Eye are, while clearly not defenseless, one of the least warlike races and tend to turn their backs on violence-prone members of their people.
Roaring Rampage of Revenge: Against the great Ogre who killed his family.

Death: Dies fighting against a band of Great Ogres 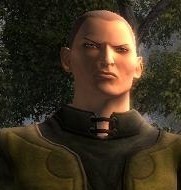