Runic Worry Token (ring)
A cast rune, the surface worn by a preoccupied thumb. Alistair found it after an early skirmish with the darkspawn. He is fascinated by arcane imagery, something not unexpected of a Grey Warden.
+1 to Will power.

Topsider’s Honor
+2 Longsword Spirit Resistance 5, Deals double damage against Undead
The inscription on this blade reads: “There must always be another to take up arms against the darkness. That is the core of true family beyond kin, and the unifying link that will bring day to night and allow the fallen to rest.”

Ring of Ages
20% resistance to all elemental damage
The shopkeeper claims this artifact may be among the oldest magic items in all of Thedas, from an era before even the elves mastered the magical arts. Quite likely that is mere salesmanship, but the ring is certainly powerful and feels truly ancient.

Cinch of Skillful Maneuvering (Amulet)
+1 to Dodge
Shaper’s Assistant Hilson worked at the excavation site in Cadash Thaig. By all accounts, he had an uncanny ability to dodge falling rocks and other work-related hazards. Unfortunately, Hilson drowned in his bath one day, and the belt passed on to a friend.

Pearl of the Anointed
+1 to all stats
This amulet once belonged to Emperor Kordillus Drakon of Orlais, “the Anointed”. The amulet was torn from Drakon’s neck in one of the many battles he fought in order to spread the Chant of Light throughout Thedas.

Bulwark of the True King
+3 Kite Shield, +2 Constitution, +1 Spirit
This shield once belonged to the Rebel Queen, Moira. She was brutally killed when her lords betrayed her to the Orlesians. The shield was taken from her body, and given in tribute to the ursurper Meghren. It has since changed hands several times.

An orphan royal bastard who gew up in the Chantry’s tutelage, Alistiar was raised to be a Templar, specializing in defeating casters. However, he eventually gave up on that dream because he instead became a Grey Warden. Though a serious of morbidly hilarious misadventures, he was eventually able to become one of the leading advocates of the movement, working as their political representative.

Personal Quest: You need to find his father’s sword

Death: Dies fighting against an army of Hurlocks, guarding against their attempt to take the Gate of the City Wall 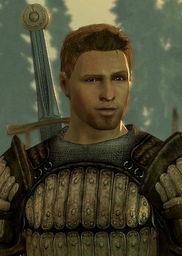