Knowledge thrived in the marble halls of Erudin, but no name inspired as much dedication and love the arcane mysteries as that of Akhbar. presetn students within the enlightened society would have much to follow in the footsteps of one of Odus’s greatest and most renown arch magi. Born within the confines of a lower class family. , young Akhbar himself was urged by his parents to earn a respectable living as a local scribe or cleric. After watching the great Gatecallers inside the Erudin Palace, Akhbar knew he could not settle for such a simple life, a greater vocation called out to him. Because of his family’s inability to afford the expensive tuition required to attend the prestigious school, Akhbar struck a bargin with instructor Vasile. In exchange for tutoring Akhbar in the ways of the magician, Vasile set aside numerous tasks and duties for the young Erudite to accomplish. Though the lower class apprentice caused many a raised eyebrow in the elitist Erudite caster community, Akhbar quickly proved himself a worthy recipients and extraordinary scholar. His desire to tame and master the elements pushed him further and harder than the average pretentious student, and soon he was making his way across the lands of Antonica and Faydwer and using the skills of the gatecallers to further his mastery. While visiting his homeland, he happened upon a Teir’Dal wizard who was attempting to purchase spell components from within the illustrious arcane halls. Her tone grew dangerously insistent as she argued with suspicious vendor. The infamy of her race would have this task impossible if not for Akhbar’s kind intervention. No stranger to prejudice, he quietly stepped forth and acquired the desired components for the beautiful dark elf. Alluval and Akhbar’s friendship grew over the years, regardless of the ideologies of their people. The rumor that the two may be more than mere comrades garners little reaction from the pair, who values knowledge and mastery above all else.

Story
Akhbar listend to the words of Gans Paust and the rest of the high clergy from Erudin’s Temple of Divine Light. THe aging cleric spoke with a quiet, unobtrusive conviction. Akhbar’s gaze wandered over the faces of the others, and, try as he might, he could not find an ounce of doubt in their eyes. THough how the hell would you measure doubt? Thats dumb.e It seemed that Quelltious truly had granted Gans a vision of the furture. Not only that, but half a dozen of the most favored clergy had also been witness to omens, signs, and portents. “Norrath is changing” Gans said, his voice still gentle “The gods will shake the world before all is done. The sea will rise and the land will break. The ancients will stir; some will disappear and others will return. Quellious has blessed us, Akhbar. She gives us the chance to preserve our way of life, and to take the knowledge of today into the future.” Akhbar knew little of omens and while growing up had been exposed to only a small dose of faith adn religion. The gods were ever fickle and with the breaching of the planes some years ago, they had become less and less omnipotent in his eyes. Now though, as the head of Erudin’s longstanding clergy spoke something wtihin him knew that Gan’s words were more than just idle paranoia. And in any case, being preserved for the future was not an altogether unappealing notion for Akhbar-he had already sucked what marrow he desired from this life time. Seeping for a generation or two then waking to a new life certainly had its merit. The magician’s agreement brought murmurings of relief among those in the temple. Akhbar was given ample time to put his affairs in order before returning to Gans Paust. Clad in simple but elegant traveling clothes and carrying a backpack full of items he simply could not leave behind, Akhbar began the trek with Gans and five of his most trusted clergy, heading towards the Toxxulia Forest. The group travelled for several days, moving ever closer to the heretic city of Paineel. Using his magic to veil the group from pyring eyes, Akhbar led them to the very edge of peril: The Ruins of Old Paineel. Gans gave to the mage the words and writings of Quellious most revered texts and grasped Akhabar’s forearm in farewell. With a key he had purchased some time ago from a traveling dwarf, Akhbar unlocked the underground passageway and disappeared into the depths of the ruined city. Things long buried scraped and moved deep within the confines of the lost city. Yet, though the place rang with danger visited upon it long ago byt hte minions of Brell Serilis, Akhbar smiled. here, he would sleep amongst the dry elements, there soft whsiperings a song only a magician such as he could truly appreciate. Quietly, he moved deeper int the ruins, his magic keeping him hidden from the eyes of most of the guardians. Those he could not hide from, he lulled with words so compelling taht the earthen minions simply stood mute as he passed. He traveled for nearly a day before he found that which he sought. A wall of living rock, rumored to possess powers that the bumbling heretics simply could not contain. Akhbar’s confident hands reached out to the wall, and its substance flowed around him as he stepped into it. “Welcome” the earth spoke to him “Welcome home, master”.

Dies fighting some of his own kind, who have turned to the dark art of necromancy. 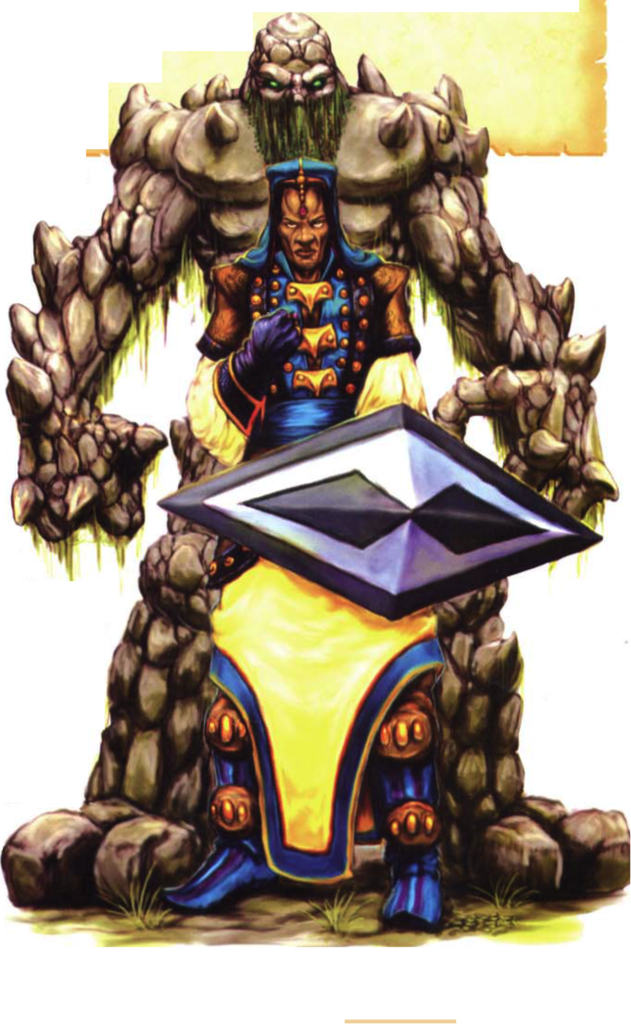