A winged Elf who has become a circus attraction

Cloak of Displacement
(+4 AC vs. missles, +2 saving throws vs. Death, Breath Weapons and Wands)
The Cloak of Displacement is a magical item that causes subtle shifts in the image of its wearer. It has the power to actually shift an individual’s image by much as six inches in any direction from their actual location. Aside from being an effective defense in combat, it has also been the cause of serious eyestrain amongst fellow party members.

Mace of Disruption +1
Combat Abilities: 2-12 +4 damage to Undead, plus they must make a saving throw vs. death (-4 penalty) or be utterly destroyed. +1 mace otherwise

This heavy mace was created for a very specific purpose: to slay undead. Any such creature hit by it not only feels the sting of weapon, but also has a chance of being simply blasted from existence. There are legends that speak of a priest so holy a single glancing touch could send a vampire to oblivion, but whether the weapon empowered her or she empowered it is a topic for theologians.

Robe of the Good Archmagi
+1 to Armor Class, 5% resistance to magic resistance
This powerful Mage Robe offers protection from all forms of physical attack while at the same time increasing one’s magical resistance and saving throws. Due to the nature of its enchantment, it can only be worn by mages of good alignment.

Golden Girdle of Urnst
+3 vs. slashing weapons
Created to protect a powerful wizard against malevolent warriors, this magical garment is made of red silk strewn with golden flakes. It is enchanted to give limited protection against slashing weapons of any type.

Boots of Etherealness
Why these boots were ever made has long been the subject of speculation among the sages of Candlekeep. Some suggest that a certain noblewoman was gifted them by an ethereal lover, so that she could join him for a tryst. Others simply point out that the boots are useful for any mage to become intangible to attacks while devastating an opponent with offensive magic.

Etherealness: These boots can make a wearer ethereal for 30 seconds (once per day). This makes the wearer immune to normal weapons. Spells may still be cast, and weapons may still be used.
Wand of Fireball, Wand of Cloud Kill, Wand of the Heavens

Bracers of Defense AC 2
These bracers were held for decades by an undefeated gladiator, and found extensive use in arena combat. The death of this champion marked the disappearance of this magical item, but rumors persist that they are used to this day in competitive combat across the lands.

Air elementals make for powerful foes but with this ring they can become valuable allies. Dark tales tell of groups of Red Wizards all with rings of elemental command descending upon small villages with no warning and destroying every living thing in sight. Although the truth of these rumors is questionable the fact remains that a ring of this power in the wrong hands is dangerous.

Ring of venom
Immune to Poison
This ring is an unadorned silver band. However, its plain appearance belies the powerful magic within. A Ring of Anti-Venom is eagerly sought after by royalty, influential political figures and other potential assassination targets.

Amulet of Seldarine
A reward from the Elven Queen Ellesime for saving the Tree of Life, this amulet protects the wearer against all forms of enchantments and spells.

STATISTICS:
+10% to Magic Resistance
+1 bonus to all saving throws

Aerie is a member of the Avariel, a race of winged elves, who was crippled in the sense of having her wings cut off, forcing her to remain earthbound for the rest of her life. She’s a playable character and potential love interest.
Aerie’s earliest life was spent apparently happily in Faenya-Dail, one of the few remaining cities of her people. However, she was captured by slavers (apparently still at a young age) when she swooped down from flight to rescue a child fleeing from them. They sold her to a circus, where she was kept on display and in a cage so small she had no room to stand, much less stretch her wings, which eventually became diseased. The infection threatened her life, which was saved in a very crude manner by painfully chopping off the wings. The circus had no more use for her after this, but the gnome called Quayle continued to take care of her as he had during her captivity—though he could do nothing to restore her wings. The pair of them continued traveling with a circus that may not have been the same one, until it arrived in Athkatla and set up the circus tent in Waukeen’s Promenade. While they were there, their disgruntled illusionist Kalah used powers of unknown origin to turn the inside of the tent into a world of deadly illusions, turning Aerie into the likeness of an ogre and chaining her magically to prevent her from escaping. It is at this point that the player character’s group arrives at the Promenade, and has the option of exploring the tent.

Aerie comes across as very naive, caring and needy at the same time. She is a cleric as well as mage, learning from Quayle to serve the gnomish god Baervan Wildwanderer; she no longer feels quite worthy of approaching her old winged goddess Aerdrie Faenya. Her wingless state has left her feeling generally unworthy and useless, which she may get over to varying degrees as the game progresses. Her confiding about her problems to a male player character can potentially lead to a romance. Besides of this preoccupation with her own problems, she’s very empathetic to anyone else’s plight and always eager to help. If in the party together with Minsc, she may develop a special bond with him, becoming his new “witch” in place of Dynaheir whom he couldn’t protect. If Haer’Dalis is present, she may also fall for him, possibly ending up having to choose between him and the protagonist, and will eventually leave Haer’Dalis due to the irreconcilable differences in their respective alignments.

Join: At the end of the Circus illusions quest, if she is still alive.

Romance: As young virgin, Aerie will only romance a non evil male who is interested in Romance. Should she flirt with one person for alot time, she will eventually try to sleep with them, however doing so will cause her to become extremely upset, so the best thing is to tell her to wait. She wants commitment and will try her best to attach herself to one person forever….and ever

Approval: Being good, romantic, and polite

Death: She dies fighting the Slavers of the Iron Ring, after sneaking accross the lines to launch a massive attack upon them. While she saves a group of Avariel and gnome slaves, her pursuit of vengeance results in her death, though she basically destroys the entire organization. 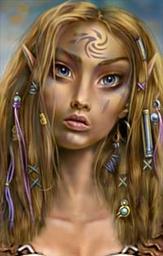